Ten short! MSc is on the throne?Maersk's true Buddha system?

"The land covers a third of the earth's surface. We'll fill the uncovered areas." ——This is a sentence on the website of mediterranean shipping company. I believe it is also the great ambition of Aponte, the manager of MSC family.

However, at present, MSC seems to be getting closer to this sentence

The shipping giant, who has been the second in the industry for 16 years, is getting closer and closer to the top of the industry

The global shipping pattern has been relatively stable since 2004. Maersk is the first and MSc is the second. The two giants have gone through the ups and downs of the shipping market for 25 years.

In 2014, the two giants also happily joined hands to establish a 10-year "2m alliance" giant, sharing 185 large ships and jointly eating the world.
However, before the ten-year "treaty" arrived, MSC, the second son, began to challenge the authority of Maersk frequently: first, it poached the leader of Maersk, the former chief operating officer; and then, he kept throwing heavy money - buying ships, buying ships, buying ships!

Maersk is about to fall off his top seat!

In particular, in 2020, the two giants have adopted diametrically opposite strategies on some issues.

Let's get insight into the seesaw battle between the two sides

At the end of 2019, Maersk announced that it would lay off staff at its headquarters in Copenhagen, Denmark and other offices around the world. The main purpose of the layoff is to reduce the cost of the headquarters' functions and make it clear that reducing costs and increasing efficiency is the top priority of Maersk's development strategy.

In September 2020, Maersk again announced the internal strategic restructuring, merger of duplicate functions, and substantial layoffs. Among the 80000 employees of this shipping giant, 26000-27000 will be affected by the restructuring. 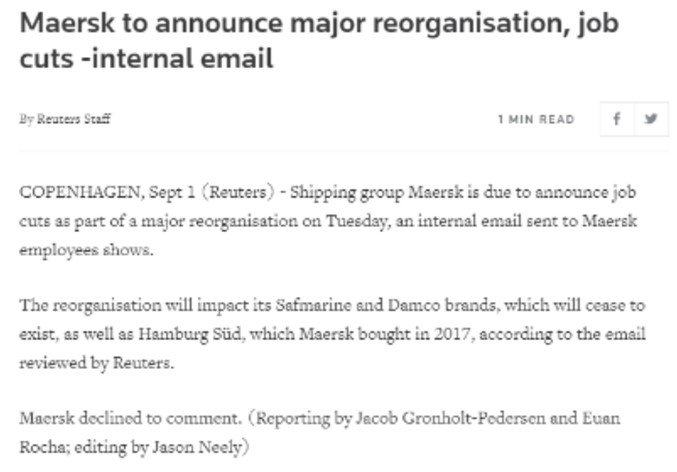 In sharp contrast to Maersk's repeated layoffs, MSc is aggressively buying ships. According to foreign media reports, MSC has been very active in the second-hand ship market in the past few weeks. According to alphaliner's estimation, the world's second largest container shipping company should have spent $180 million on the second-hand ship market in just over 20 days, buying 11 ships, most of which were previously rented. For example, one trans Panamax container ship was purchased from eurosea, a Greek ship owner; six container ships, ranging from 7849teu to 8500 TEU, were purchased by MSC German shipowners, with an overall price of US $158 million; and a 2490teu "Bomar Hermes" container ship built in 2006 was purchased from Borealis finance.

According to sea intelligence analysis, Maersk's fleet size is about 6% larger than that of MSC at this stage. If all the second-hand ship transactions of MSC are confirmed, its container fleet will reach 204, and the size difference between the two giants will be reduced to 4%.

In terms of global market share, the two giants are part of the 2m alliance, and the difference is only 0.9%. 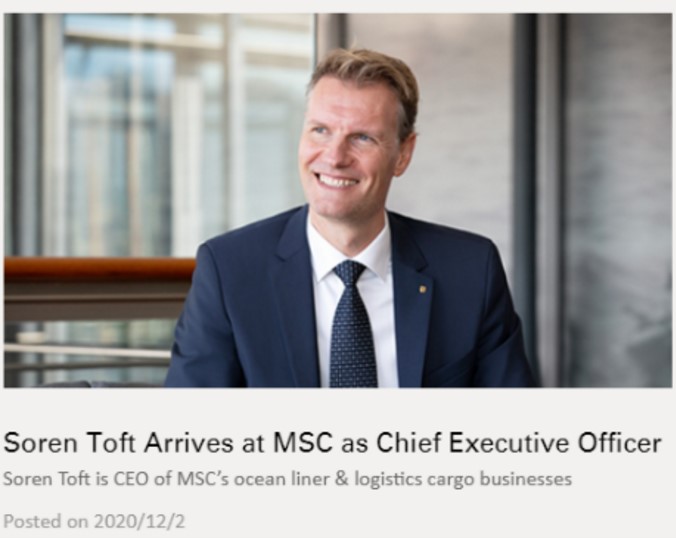 
Maersk is really going to lose his throne? Not only in the size of the fleet, but also executives frequently leave.

It is reported that Soren Toft officially began his new job as the CEO of MSC on December 2. He will be responsible for supervising MSc's global freight business, including ocean liner and logistics business. He will also be a member of the board of directors of terminal investment Ltd (TIL), which is the terminal business controlled by MSC.


MSc said that Soren Toft has a very deep industry background. With 25 years of leadership experience in Maersk and a comprehensive understanding of the future of the container transport supply chain, Toft is the ideal choice to help MSc steer the future, which will bring great value to MSC's freight business.

From the statement of MSC, we can smell the smell of MSC enabling Soren Toft and Maersk PK.

Soren Toft, 45, has devoted his entire career to shipping.

He joined Maersk at the age of 20 in 1994. He has worked in Maersk for 25 years. He has held leadership positions in sales, strategy and operation departments. He was also responsible for Maersk shipping route planning. He has worked in Denmark, Hong Kong, Indonesia, Germany and other countries and regions.

In addition, Toft is a member of the South American Advisory Council in Hamburg.

In September 2020, Maersk officially announced the reorganization of shipping and logistics business, merging Safavi shipping into Maersk, air transportation and LCL business of Danmark, and integration of Maersk Logistics and service products. This means that the two brands Damco and Safmarine are finally launched and disappeared, and some overlapping employees face unemployment, which is one of the reasons for Maersk's layoffs mentioned earlier.


This may be a cost reduction and efficiency increase measure for Maersk's current cost burden, but it obviously stimulates the old rival of Danmark, DB Schenker. After Maersk integrates Damco, it means Maersk Group is no longer just a transport provider, but a competitor in the logistics chain.

"After being fully integrated by Maersk, Damco is now a giant, and we have to do something about it. Danmark is now in a special period, and many customers need stable service, which is what we can provide. " DB Schenker said.

DB Schenker also said that the agreement with Maersk has been terminated and most of the business (previously handled by Maersk) has been transferred to MSC.


This is "the snipe and clam fight, the fisherman gains".

MSc, without any effort, has won a market which belongs to Maersk.


Maersk is the current CEO of s ó Ren Skou

For a long time, Maersk seems to be aggressive, like mergers and acquisitions, like to expand the fleet. However, Maersk now seems no longer satisfied with the traditional container shipping business. It makes efforts in the end-to-end market, sets foot in the supply chain, acquires small customs declaration companies, invests in logistics platform enterprises, and takes the lead in the development of blockchain platform. Maersk's strategic vision seems to be more and more invisible to the outside world.

Look at the history of Maersk's landward development——


According to Maersk, Maersk hopes to enrich the company's business content and no longer put eggs in one basket. Especially after the new outbreak in 2020, Maersk realized the great risk of a single business at sea and the importance of operational flexibility. It hopes that half of the company's future revenue will come from land logistics business.


On the contrary, MSc is more focused on maritime positions, and is dedicated to buying ships, ships and ships; expanding, expanding and expanding! The momentum points directly to the throne of the shipping industry.

Circular of the Maritime Safety Administration

Notice of Maritime Administration of Ministry

Notice of the Maritime Administration of the P